In the spring of 1970, a Pretoria schoolboy falls in love with Muhammad Ali. He begins to collect cuttings about his hero from the newspapers, an obsession that grows into a ragged archive of scrapbooks. Forty years later, when Joe has become a writer, these scrapbooks both insist on and obscure a book about his boyhood. He turns to his brother Branko, a sound editor, for help with recovering their shared past. But can a story ever belong equally to two people?
Against a spectacular backdrop, the heyday of the greatest showman of them all, Vladislavić unfolds a small, fragmentary story of family life and boyish ambition, illuminating the origins of a writing life and the limits of language. 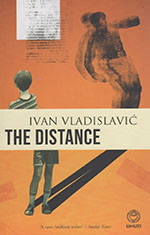 Joe is reading the Bible. He started at ‘In the beginning …’ and he plans to go all the way through to the last ‘Amen’. He’s been busy for five or six months and he’s got as far as the First Book of the Chronicles. Every night, unless we’ve come in late from the cycle track or he’s listening to Malcolm Gooding’s music show on the transistor, he kneels down next to his bed and says his prayers. Then he creeps under the blankets, takes the Bible from his bedside table, opens it at the bookmark, which is shaped like a shepherd’s crook and has a picture of St Christopher on it, and reads two pages. Neither more nor less. This way he’s calculated it will take him eighteen months to get to the end.
Joe is a great reader, as they say. In the school holidays, he lies on his bed in the sun all day and reads like a machine. He can devour a book in a day, five books, if you count the Reader’s Digest condensed volumes, which he swallows like an astronaut eating five square meals in tablet form.
Why don’t you just read the Bible in one go? I ask. That time you had measles you got through Riders of the Purple Sage without stopping to water the horses. You could do one hundred pages of scripture a day and still have time for a couple of chapters of Leslie Charteris. Ten days and it would all be over. Two weeks at a stretch.
I can’t do that, he says. The whole point is to read it in stages.
Like the Tour de France?
Ja, exactly. You can’t sommer beetle on to the end. You’ve got to do one stage a day like everybody else.
There’s another rule, I discover: no skipping. He has to read every chapter of every book. Not just Exodus and Proverbs, but Nehemiah and Amos and Nahum. Nahum. Who the hell reads him? Every verse of every chapter too and every word of every verse. All the begats and comings to pass, all the instances of this one saying unto that one and that one arising and going forth, all the lists of the sons of the one and the brethren of the other. He says that’s the best part, the lineages. He’s making a list of all the main manne – he waves a blue exercise book – and that’s why he’s got stuck for two weeks in the First Book of the Chronicles.
All of them? I say. You’re making a list of all the Sons of Adam?
No, he says, only the good okes.

The Distance quotes from a collection of newspaper and magazine cuttings made between 1971 and 1975. Many of the sources are named in the text, but not all could be identified with certainty. The following list includes the known details and best guesses.