Willem Boshoff creates art in the flickering play between the verbal and the visual. His early works, KykAfrikaans and the 370-Day Project, are landmarks of concrete poetry and conceptual art in South Africa. In a prolific career spanning more than two decades, he has produced idiosyncratic dictionaries, intricately crafted wooden sculptures, transient installations in sand, and monumental works in stone. If there is a single thread binding these diverse works together, it is a fascination with language and books.
Boshoff is an artist of gargantuan intellectual appetite and creative ambition. He has trawled through two hundred dictionaries researching his massive Dictionary of Perplexing English; travelled the length and breadth of South Africa gathering samples of wood, soil, seed and stone; and haunted botanical gardens around the world to gather first-hand knowledge of plants for his Garden of Words, aiming to commit the names of thirty thousand species to memory.
This book is the first extensive overview of Boshoff’s oeuvre. Combining detailed readings of several major pieces and a sensitive grasp of broader influences, Ivan Vladislavić traces continuities in the work and places it in its social and political context. What emerges is a complex portrait of an artist of many guises: philologist, natural historian, activist, teacher, jester and visionary. 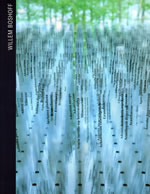 EXTRACT
The first dictionary he worked his way through was the 6th edition of the Concise Oxford Dictionary. He still has this excessively creased and dog-eared book. From there he moved on to the Living Webster Encyclopaedic Dictionary of the English Language (1973) and then the Dictionary of Visual Science (edited by Schapero, Cline and Hofstetter). Over the following decade and a half, he would trawl through another two hundred dictionaries, including the 25 volumes of the Oxford. By 1999, the main product of this work, the Dictionary of Perplexing English, listed around 18 000 words. It is a long time, he tells me in passing, since he has read a ‘storybook’.

When I was just starting to research this essay, Katja Gentric remarked to me that many commentators confronted by Boshoff’s work immediately begin to make lists. I had the same impulse. Let me make an alphabet! A is for Art (fr L ars), B is for Baard (fr L barba), C is for Chart (fr L charta) … What is this impulse about?

By feigning completeness, the list promises to relieve anxiety. The global anxiety produced by the turn of the millennium, which itself was compounded of terror that time would stop and a horrified hope that it would keep unwinding, was shored up by countless lists in reassuringly round figures. The 100 Best Books of the Century; the 100 Most Important Leaders, Sportsmen, Accountants; the 100 Most Useful Inventions. The celebration of ten years of democracy in South Africa produced a similar frenzy: 10 Years 100 Artists; 100 Great South Africans; 100 Weekend Getaways. But the obvious question immediately arises: why not 99? Why not 101? A list ends up fuelling the very insecurity it was designed to alleviate. Instead of order and efficiency, it produces instability or paralysis.

Some great comic writers – Rabelais, Beckett, Barth – have exploited the subversive power of the list. In the midst of a narrative, passing straightforwardly along its syntagmatic path, logically and progressively, as horizontal as this line, a list is like a swamp, bog, morass, slough, wallow – a place where propulsive logic fails and the reader begins to plunge vertically through the paradigm. A narrative thread is as reassuringly solid as a concrete path underfoot. A list is porous and soft. It reveals the provisional nature of the terms in which we choose to express ourselves.

Boshoff’s Dictionary of Perplexing English is like this. It promises to elucidate an exhaustive catalogue of mysteries. Instead it reveals the pervasiveness of perplexity. In most dictionaries, everyday words predominate. Here and there an oddity, a specialized term, an archaism, a regional variant (why are so many of them Scots?) sits like a raisin in a bun. Boshoff’s dictionary is all raisins. It is too rich for the abstemious eye, like one of those eat-as-much-as-you-can buffets. You turn away from it, sated and half-sick with language even before you open your mouth. It is just as well that he has chosen to use the dictionary as a resource, giving us exotic tidbits in smaller portions.